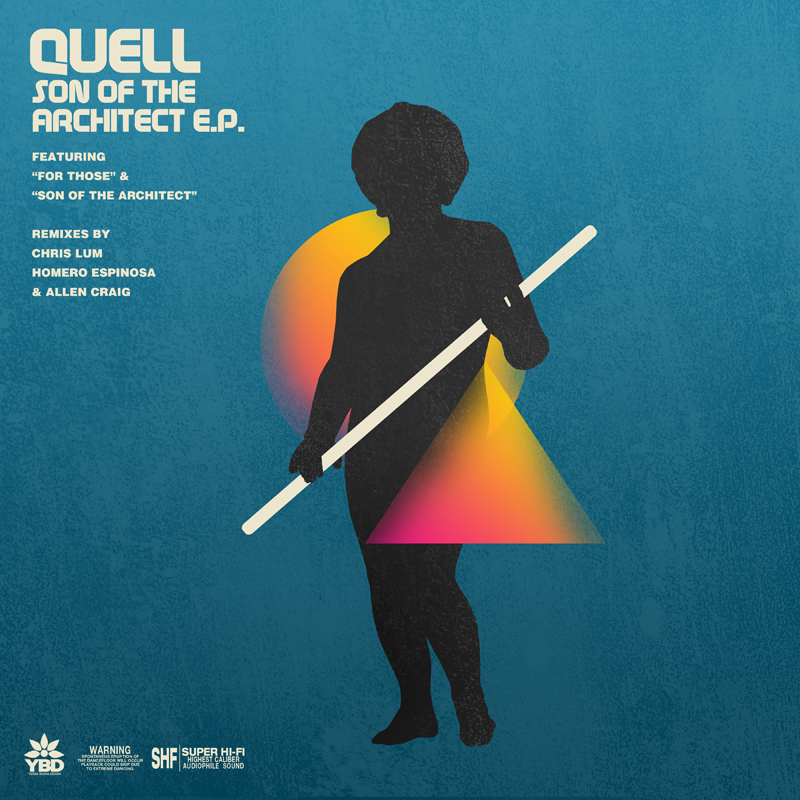 preview
Quell – For Those (Original)
Quell – For Those (Chris Lum & Homero Espinosa Remix)
Quell – Son Of The Architect (Original Mix)
Quell – Son Of The Architect (Allen Craig Remix)
Full EP 1 2
Retro-90’s deepness meets futuristic hipness!
YBD is proud to announce our 19th release!
This one comes courtesy of underground genius Quell. He hits hard with two original tracks, For Those and Son Of The Architect. Quell’s sound here is a thoroughly modern take on classic house. He keeps the BPMs down, but not in the sense of funk or space disco, but more in tribute to old-school underground house, from back in the day when the BPMs ran around 120.
For Those is a postmodern version of the classic NYC big club deep tracks. For the old school heads, just close your eyes and it’s 4:30 am on a huge, crowded smoky dancefloor, back when the clubs were dirty and the beats were deep and raw.
Son Of The Architect is a modern mash-up of classic elements, incorporating everything from Brazilian percussion to classic Chicago wild pitch elements and hip hop vocals. It all comes together into a hypnotizing groove that’s equally at home in 2010 as it would have been at the Sound Factory in 1993.
YBD’s Homero Espinosa hooks up with San Francisco underground kingpin and Harlum Muziq partner Chris Lum for the remix of For Those. They twist the track into something that’s equal parts modern electro-acid and classic big room house. We dare you to not start smiling when those keys kick in…
The remix of Son Of The Architect comes courtesy of YBD head Allen Craig, who re-works the wild pitch elements of the original into a deep journey of a track. This is where the big clubs of yesteryear meet the dancefloors of today – You’d better turn on the smoke machine!
Here’s what folks are saying:
Mark Farina – Old school, deep and techy! Nice.
Nacho Marco – Lovely stuff!!!
Onionz – Strong EP
Demarkus Lewis – Like the Son of the Architect (Original mix).. very nice.
Atnarko – Son of the Arch for me – OG and Allen Craig mix. Very nice!
Deron Delgado – Original mix is great, and Homero and Lum’s production sounds tight. Swear I heard some Inner City in there somewhere…..
Kinky Movement – Loving the Chris Lum and Homero Espinosa mix. Thats the best effort at an old school sounding track I’ve heard since last time round. Can’t wait to play it!
Asad Rivi – A tidy lil’ package – will get some plays for sure.
Kirby – Really nice new EP from Quell, I do really love the Chris Lum & Homero remix of For Those. Nice inner city sound. Detroit! Son of the Architect (Original) & Allen Remix are tight too 🙂
Craig Hamilton – Nice old school vibes on this release, another winner from YBD.
Dave of Illegal Cargo Records – NICE! Solid, classic house vibes.
Bob of Six Degrees Records – I’m particularly loving the deep lushness of Son of the Architect (both mixes). Lovely stuff.
Elan of Blockhead Recordings – Solid.
Published inUncategorized