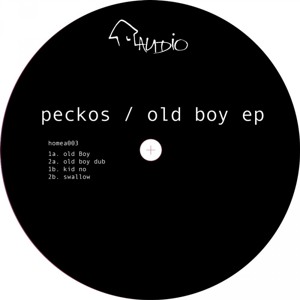 release date: Aug/1/2011
Peckos – Old Boy (Original)
Peckos – Kid No
Peckos – Swallow
Full EP
Home Audio Recordings follow up their previous critically acclaimed releases from Refinery and Giovanni Damico with Belgium’s underground house maestro Peckos and his ‘Old Boy EP’. Four tracks of absorbing deeper house and tech grooves well suited to the darker dance floors. From the grinding ‘Old Boy’ and is bouncy ‘Dub’ version to ‘No Kid’ and ‘Swallow’ the EP shapes up with the accomplished sound that has made Home Audio one to follow. ‘Old Boy’ EP will be released on both vinyl and digital formats.
Peckos (aka Sven van Coillie) began his love affair with music back in 2001 and having dabbled with techno, electro and commercial dance he has made a name for himself since 2005 with his deep and funky house tunes on labels such as Lost My Dog, Guess Who, Shak Digital and more. His tracks have been remixed by the likes of Raoul Belmans and Tommy Largo, and supported by well-known names such as Mark Farina, DJ Sneak, Laurent Garnier, Lovebirds, and JT Donaldson. His own remix discography includes working with Bernard Jones, Jay West, D-T3ch and Danny Stott.
Home Audio is the label of Chicago and house stalwart Angel Alanis who also operates Slap Jazz, A Squared and works alongside DJ Pierre on his Afro Acid label. Whilst the label is still new, Angel’s own work extends back several years and featured on labels such as Uniform, Baker Street, Thoughtless, Headtunes, Dust Traxx and many more. Watch out for Pao & MainRo coming soon on Home Audio Recordings with Sensou, Greencross and Mr Goetz remixes.
Home Audio Recordings
Released by: Home Audio Recordings
Release/catalogue number: HOMEA003
Release date: Aug 1, 2011
Join Us
Published inUncategorized